How Does Trash Get in the Ocean? (And What You Can Do to Minimize the Risk!)

If you’re an eco-conscious person, you’ve probably never thrown trash into the sea. You’ve probably never even left trash lying on the beach. So you might be wondering – how does trash get in the ocean? Are that many people using the ocean as their private garbage can?

Not quite. Of course, there are some irresponsible people throwing trash in the ocean, but a lot of ocean waste comes from people who never intended for it to end up there. People like you and me.

HOW MUCH TRASH IS IN THE OCEAN?

Every year roughly 8 million tons of plastic gets into oceans – equivalent to one truckload dumped into the sea every minute. This is expected to double by 2030 and quadruple by 2050.

And that’s just plastic. On International Coastal Cleanup Day 2019, teams found a golf bag, a garden gnome, and an ironing board among other strange items, so you can only imagine the amount of non-plastic trash pollution in the ocean.

In short, the amount of trash in the ocean is in the millions of tons. Some of it is swirling in giant garbage patches of floating trash in the ocean, some is eaten by animals, and much has sunk to the bottom, impossible to remove.

Related Reading: Eco-friendly Trash Bags – Too Good to Be True?

HOW DOES PLASTIC AFFECT THE OCEAN?

From the depths of the Mariana Trench to the top of the Arctic, there isn’t an inch of ocean that hasn’t been affected by plastic in some way.

– How does littering affect the ocean?

Unless picked up, litter makes its way into bodies of water. This is usually the waste that you see harming marine life directly: seagulls caught in six-packs or sea turtles ingesting plastic bags.

Abandoned or lost fishing equipment is also a huge problem. Estimated to make up about 10% of plastic ocean waste, this entangles everything from crustaceans to whales and causes serious damage to underwater habitats.

– How does trash affect the ocean?

Even trash that makes it to landfills affects oceans. Municipal solid waste is the third-largest source of methane emissions in the US, which is roughly 30 times more potent than carbon dioxide.

Methane emissions are a major contributor to rising temperatures, which affect marine life and humans. We’ve already lost a staggering 50% of the world’s reefs due to coral bleaching, a major blow to marine diversity.

Every year, the severity and frequency of tropical storms and flooding increases, and sea-level rise is threatening coastal areas.

– How does pollution affect the ocean?

Beyond debris, nonpoint source pollution, or runoff, is one of the biggest sources of ocean pollution. This comes from a combination of sources like farms, vehicles, and septic tanks. Runoff containing nutrients causes algal blooms, which deplete the ocean of oxygen, resulting in massive dead zones.

Then of course there’s point source pollution from things like oil spills and factory discharge, the effects of which get the most press coverage, even though they are less widespread.

– What does plastic do to the ocean?

When plastic breaks down it leaches chemicals that have been found to disrupt hormonal systems and cause cancer. It’s hard to know precisely the amount of these in the ocean, but one researcher in Japan found up to 150 parts per million in samples from the Pacific.

Easily ingested microplastics make they way into food chains. As bigger animals eat smaller ones, chemicals accumulate in their tissues and end up on our plates. Microplastics aren’t just a problem for meat-eaters either. They’ve been detected in sugar, salt, water, beer, and even the air.

– How long does plastic last in the ocean?

Unless removed, it lasts a very long time. How long does plastic take to decompose in the ocean? It depends on the material and conditions, but most estimates say hundreds to thousands of years.

Since plastic has only been around for about 100 years, this means the cumulative effect of plastic trash in the ocean is still unknown.

SO HOW DOES TRASH END UP IN THE OCEAN?

When it comes to people who are not dumping waste or abandoning fishing gear, how does trash reach the ocean?

Trash that falls on the ground due to littering, wind, transportation, or overflow gets washed into storm drains. These carry trash into waterways that make their way to the ocean.

In fact, a study from 2017 found that just 10 rivers around the world are responsible for carrying 90% of the world’s plastic pollution to oceans.

Any time you throw away something that could be recycled, you’re increasing the chances that this will eventually go out to sea.

Things that get flushed or washed down the drain may be treated, but anything that isn’t completely organic is going to be a problem.

Pounds of wet wipes have been found matted along the coastlines (find out how to find eco-friendly baby wipes here), and 14 countries have already banned microbeads due to the fact that these inevitably wind up as microplastics in the ocean.

Our clothes shed synthetic microfibers, which get drained along with the water when we do laundry. As these are extremely small to nearly invisible, they are widely dispersed and easily ingested.

Ocean pollution is a huge problem, but there are lots of strategies for how to reduce plastic pollution and prevent the contamination of these vital bodies of water. Let’s look at a few ways you can start to tackle the problem now.

Go as Zero Waste as Possible

First and foremost, reduce your use of plastic as much as possible!

Bring your own bags for grocery shopping, use your own containers for takeout food, and take a reusable water bottle everywhere. Refuse plastic whenever you can.

Recycle if it’s not possible to be completely zero waste. Don’t throw trash into overflowing bins and make sure lids are securely closed.

Switch to organic fibers. Wear those that you already have or get them secondhand for the smallest impact. Wear less synthetics and wash them by hand or on a gentle cycle.

Install a microfiber filter if you can, or use a mesh bag or laundry ball designed to capture microfibers. Wash clothes less frequently and in cold water.

Don’t use fertilizers or weed killers on your lawn or garden. Choose organic products as much as possible when you shop.

Use your voice to spread the word about this issue and what people can do. Ask companies to eliminate unnecessary packaging, and lobby governments to ban single-use plastics and tax polluters.

The next time you hear a frustrated beachgoer or a friend ask: ‘Why does plastic end up in the ocean?’ you can tell them!

It’s largely due to our wasteful lifestyles and carelessness, but the good news is there’s a lot we can do to change this if we all do our part.

Pin this for later! 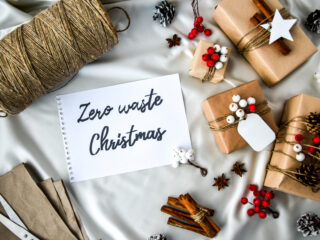 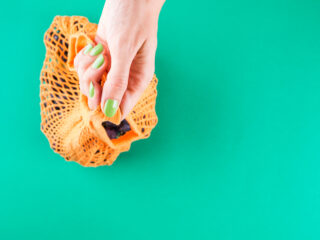